Khaled Al Saai has been working on a commissioned work for an exhibition from 21.09.2018 to 11.10.2018 in the Mschatta Hall of the Museum of Islamic Art, Pergamon Museum in Berlin.

From February 2019 onwards Khaled Al Saai’s painting “Syria – The Garden of History” will be exhibited in a major exhibition entitled “Cultural Landscape of Syria – Preservation and Archiving in Times of War”. 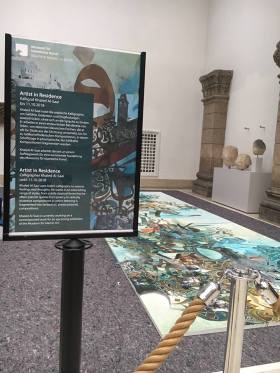 Khaled Al Saai uses Arabic calligraphy to express feelings and thoughts. He works in an astonishing range of styles, from subtle classical forms that he often uses for quotes from poetry, to radically inventive compositions in which lettering is fragmented into fantastical, almost pictorial, compositions. On his travels he was inspired by cities, landscapes and architecture, the hustle and bustle of people on the streets and the changing seasons. The letters and words of his works are not arranged in straight lines, but flow densely, detached from one-another, in the imaginary space of the canvas. The interwoven letters follow their own rhythm and combine with breathtaking beauty.

Khaled Al Saai, born in 1970 in Homs, Syria, grew up with painting, music and calligraphy. At eighteen, he had already made a name for himself as a calligrapher. After graduating from the University of Damascus, he became an internationally recognized master of Arabic calligraphy. Khaled Al Saai has participated in many international art competitions and has had numerous solo exhibitions in Europe and Middle Eastern countries. 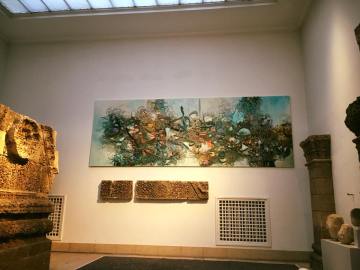 More about the calligraphic artwork by Khaled Al Saai:

“Syria – The Garden of History” tells the story of Syria in different ways. Khaled Al Saai used photographs of the country of Syria and involved art of calligraphy, as the main structure of the painting. There are words or/and lines of poetry around each city to add another level to the paining.

An example: the story starts from the right with Damascus city, the name of the city is written in that space, surrounded with major key marks of this city, but the main structure of the city is based on one letter, which is (sh, ش ) that this letter has many metaphorical interpretations, which represents sun or orient and light, then the lines or surrounding words are a poem about Damascus, in the same space of Damascus there are over than 40 photos collaged, to give the whole dimensions of the city.

So Damascus is an example, but the main structure of the painting are letters and words for the 14 major Syrian cities, and each one has its unique story, as Hasaka حسكة (the city of early watering system, the city of old civilisations, etc), Latakia لاذقية (the city of methodology and early alphabet, the sailing center etc), Aleppo, حلب (the capital of Alhamdaneen state ,the city of Almutanabbi the greatest Arab poet ever, the sense of Arabic music etc).